That’s when an image of doe-eyed little Hailey went viral. She’s that sorry-faced girl, presumably in her early teens, dressed in black and holding a lime-green piece of paper. On it is a hand-written confession for cyberbullying another through social media. As a consequence, her mother made her donate her iPod to Beat Bullying, an anti-bullying organization. 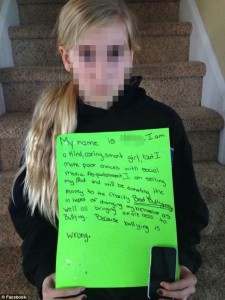 Judging from the response of many parents, punch-drunk on pop-psychology, you might think Hailey’s mom was Cruella Deville’s meaner sister.

She’s accused of psychologically scarring Hailey for life, and of being a bully herself. A chorus of adults, ignorant as to the real dynamics of bullying, claim that Hailey will be an even worse bully thanks to her ignorant and abusive mother.

We have lost our minds.

Here’s why. For about half a century, the American psyche has been permeated by a squishy-nosed and hyper-permissive parenting psychology, a knee jerk reaction to the heavy-handed and punitive parenting that proceeded it, defined primarily thought not exclusively by harmful shame. As a result, today’s proverbial pendulum has swung too far toward a pernicious leniency, not just by parents but society as a whole toward the anti-social behavior of children.

Ever had the pleasure of being stuck a few hours with children reared under today’s permissive regime during the holidays where anything goes, including your sanity? No wonder alcohol sales spike then.

Consequently, any corrective measure that carries a whiff of shame, such as healthy and needed guilt, gets a bad rap today.

More bullies, not less, need to feel guilt, which we might call today “healthy shame,” a kind of ” “shame on you” for wrongdoing as opposed to “shame in you” that leaves a child feeling worthless and unloveable.

Having swallowed more than my fair share of the sea water of childhood abuse-the burning, gasping, bewildering kind – I know harmful shame. It guts you of life, making you believe you are no one nowhere: vile, worthless, loveless-even to God.

That isn’t what happened here. Look at the first few adjectives of her guided confession: “I am a kind, caring, smart girl.” Hailey surely had her mother’s help writing this. That’s because she wanted her to feel healthy shame/guilt for her action, not harmful shame for existing. This is correction, not identity-level condemnation.

Our semi-declared War on Bullying will not succeed unless we have more parents like her. To say it another way, we will continue to lose lives to bullycide as long as we have parents like Levi Weatherly, whose son was accused late last year of bullying a 13-year-old autistic teen, and who justified the bullying by saying, “I would say three-fourths of this stuff he brings on himself…”

Where’s the outrage for this and countless other justifications for searing the psychological flesh of another child? Sins of omission are just as deadly as those of commission. They just don’t make the headlines as they should.

If you worry about the fragile, inner butterfly of the average disciplined bully, don’t. Studies show they possess average to excessive self-esteem. They are not broken-winged little doves in need of greater tender loving care. Serial targets are the ones limping through life, not speaking up, keep their heads down, their opinions silent, choking down tears, insults and related abuse. They are the ones who are literally having their DNA mutated from bullying, crippling their ability to control their anger, among other damage. No wonder 85% of school shootings have revenge against bullying as their prime motive. Want to retain your right to bear arms? Then support the War on Bullying.

And since when is getting a taste of one’s own medicine always bad? One mother, when hearing about Hailey’s predicament, wrote, “When I was 6, my mom caught me bullying a kid for being poor/dirty. Made me wear the same unwashed outfit for a week. BAM! Empathy learned.”

Dr. Jennifer LaFleur, a psychotherapist from Canada and bullying expert, admits she was a “mean girl,” came from a strong and non-abusive family, had excessive self-esteem, and intentionally bullied an innocent girl out of her classroom. She now helps bullied children. What made her change? “When an older girl, Debbie, bullied me.”

Our schools will be much safer, our ailing test scores much higher, and the mental health of our children so much greater if more parents did what Hailey’s mother did.

So called “compassion” toward a bully is often cruelty to her targets. Keep this in mind the next time we send up sincere but false flair warnings of parental abuse against a parent trying to make our schools and world a better place.

Paul Coughlin is an expert witness regarding bullying and the law, a FoxNews contributor, a former newspaper editor and is the author of numerous books, including Raising Bully-Proof Kids. He is the Founder of The Protectors: Freedom From Bullying—Courage, Character & Leadership for Life, which provides a comprehensive and community-wide solution to adolescent bullying in schools, summer camps, faith-based organizations, and other places where bullying can be prevalent.

posted in Cyberbullying, In the News
no comments »
Share This: