What Parents Look for in Christian Schools

This article is part of Barna’s back-to-school series. In the coming weeks, we’ll explore brand new research on education, from parents’ expectations and college trends to students’ schedules and school violence.

With the new academic year upon us, parents will be preparing to send their children off to school with different expectations and motivations for their education. Their process of choosing a school was most likely informed by the educational objectives they most value for their children. But what are the priorities of parents when it comes to choosing a school? And what role does faith play in such important decisions? In partnership with the Association of Christian Schools International (ACSI), Barna asked parents of current and prospective Christian school students about their schooling decisions.

The Goals of Education
When it comes to what they consider to be the goals or ultimate purpose of education, parents of both current ACSI students and prospective students want more for their children than a list of accomplishments or path to wealth. Parents clearly think of schools as meeting a complex range of student and family needs. Of course, that includes academic subjects. It also includes other ways of developing and nurturing children.

Barna asked these parents to choose the top five purposes of education. For both groups of parents, the most selected goal of education is to instill strong principles and values (current: 69%, prospective: 53%).

The most selected goal of Christian education is to instill strong principles and values. CLICK TO TWEET 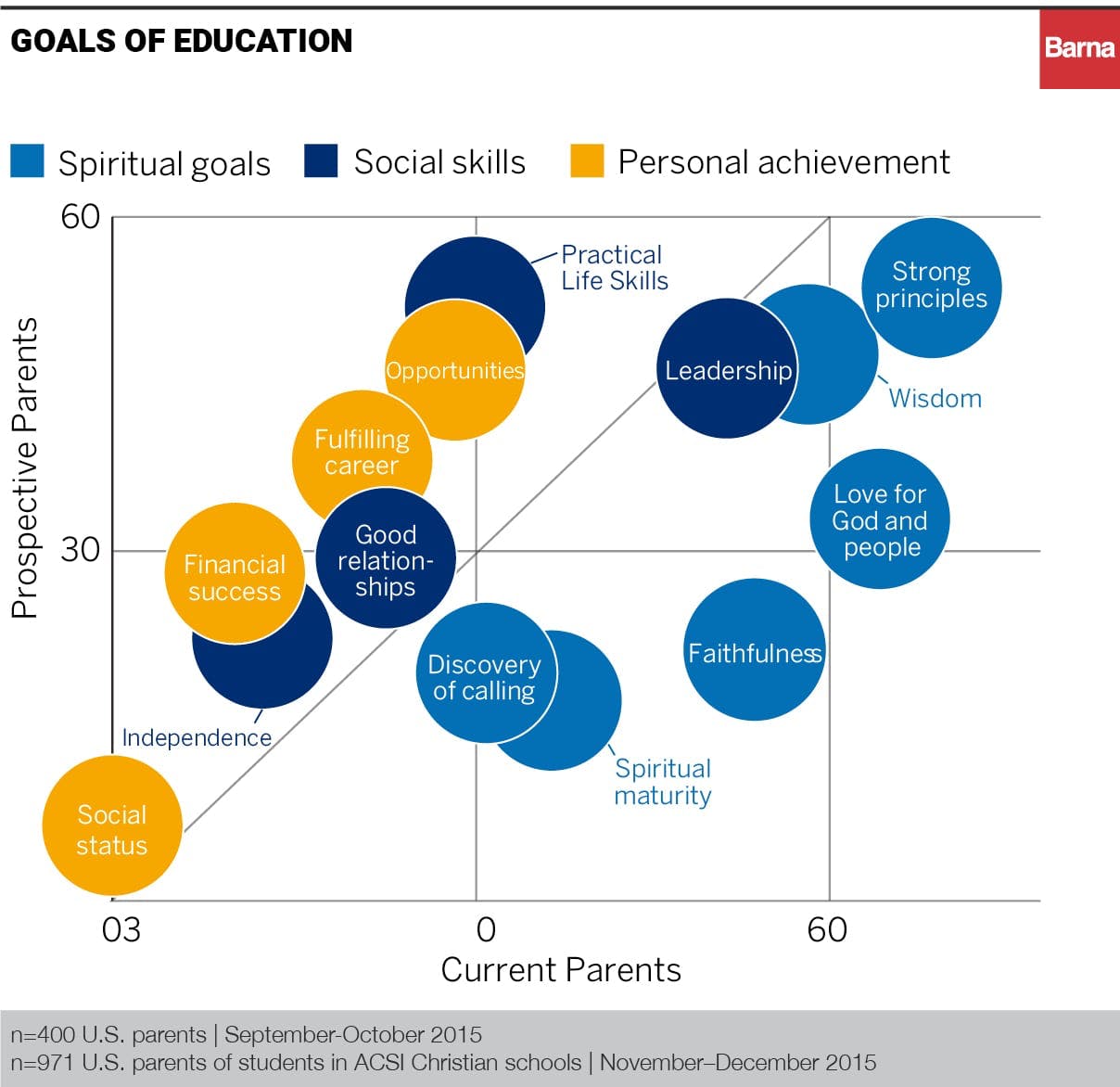 There are some key differences however. Prospective parents are more focused on objectives related to personal achievement and social skills like “practical life skills” (51% compared to 31%), “increased opportunities in life” (45% compared to 29%), and a “fulfilling career” (38% compared to 22%). On the other hand, parents of current students place a higher priority on spiritual goals and a lower value on personal achievement. As a group, the ACSI parents believe education is primarily for developing a child’s character and spirituality, then academics and career. They do not believe education’s ability to raise a child’s socioeconomic status is nearly as important.

In addition to instilling strong principles and values, a majority of parents of current students place a high priority on five goals that include “love for God and other people” (65% compared to 33%), the “ability to apply their knowledge” (referred to as wisdom) (60% compared to 47%), “faithfulness and obedience to God” (54% compared to 21%) and “leadership skills” (52% compared to 46%). 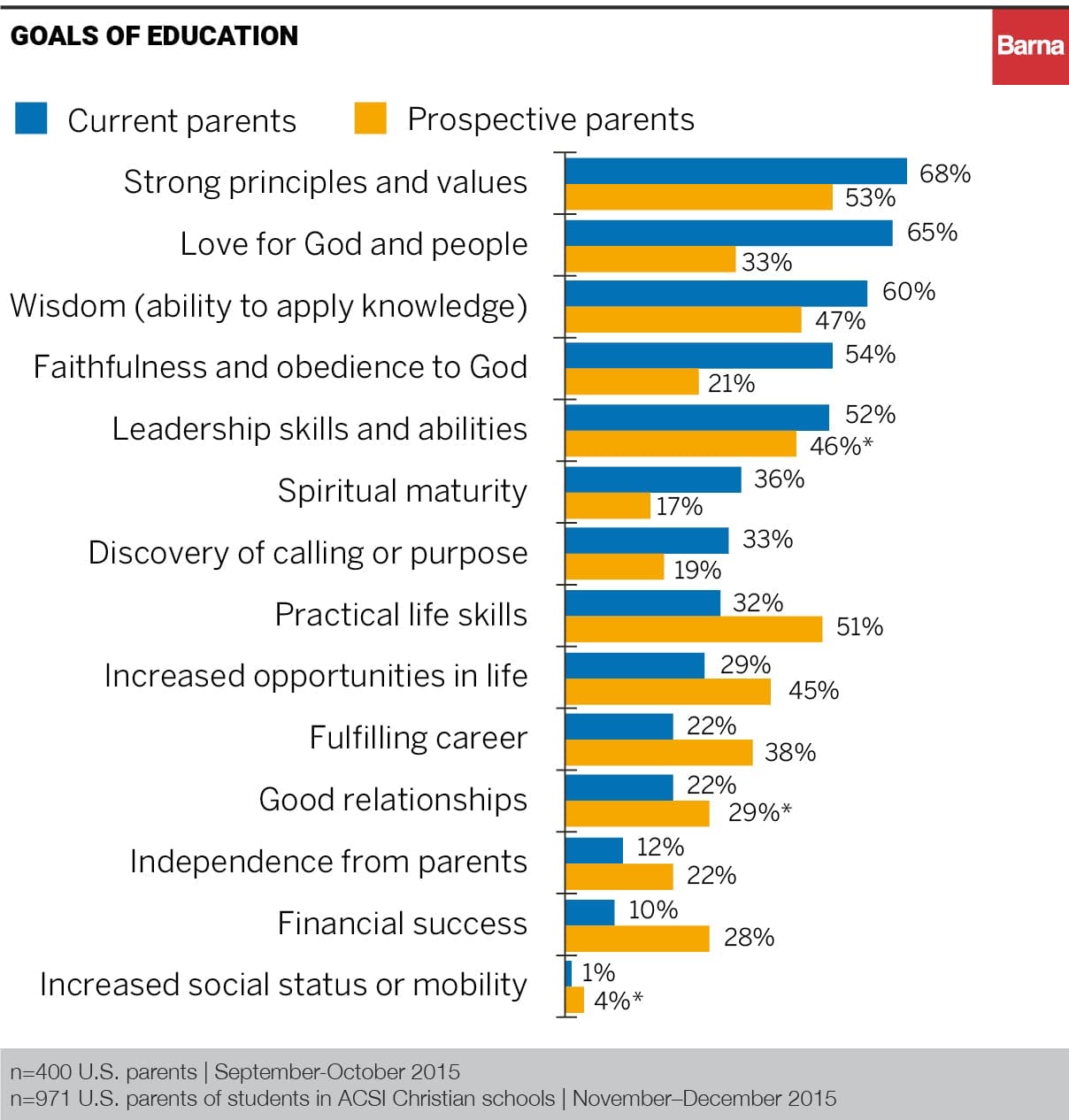 Safety’s first. Next come quality teachers, academic excellence and character development. Barna asked parents to rate 23 characteristics of a school from “essential” to “nice to have” to “not necessary.” What follows is a detailed look at the top four characteristics that are most important to parents. 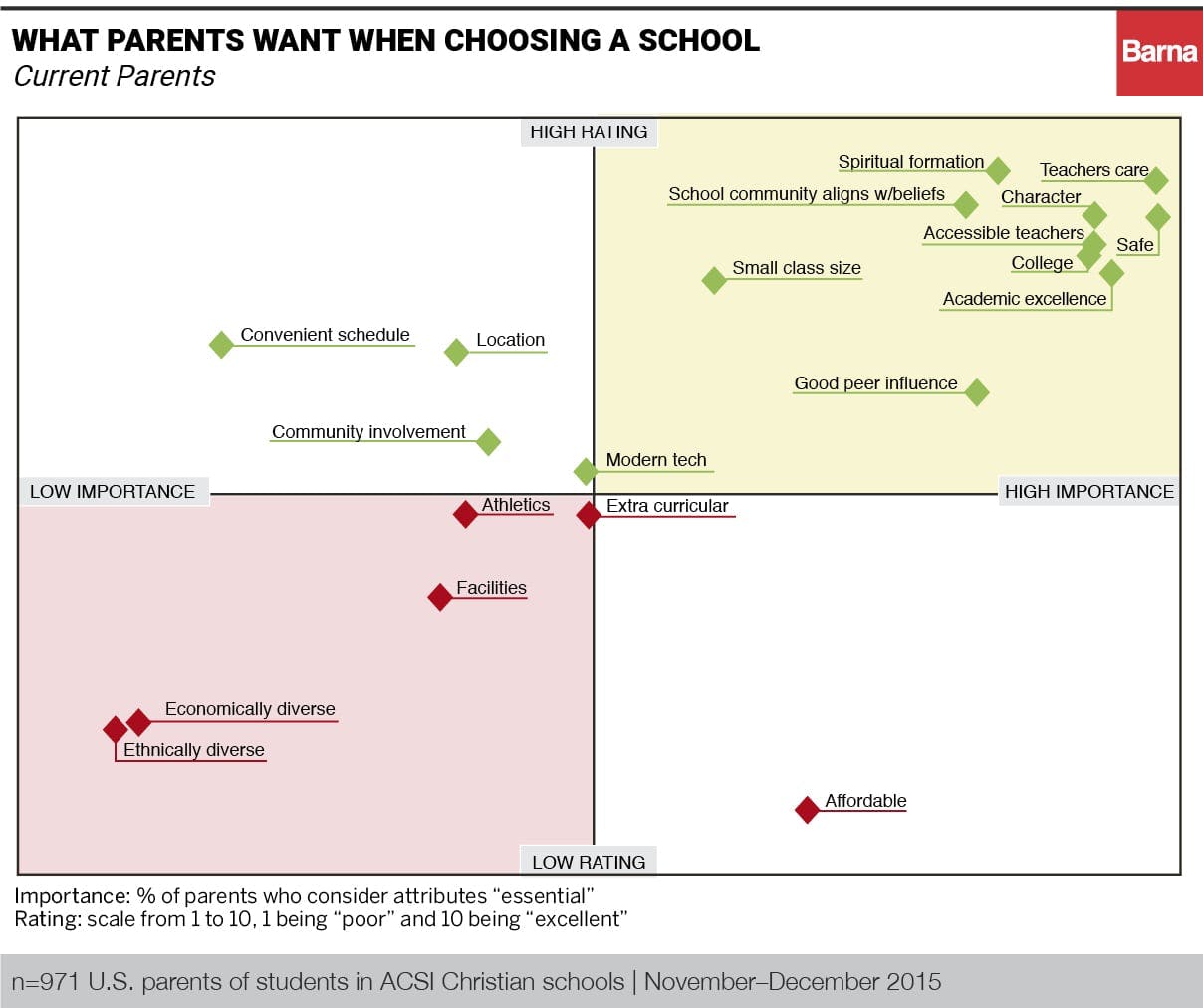 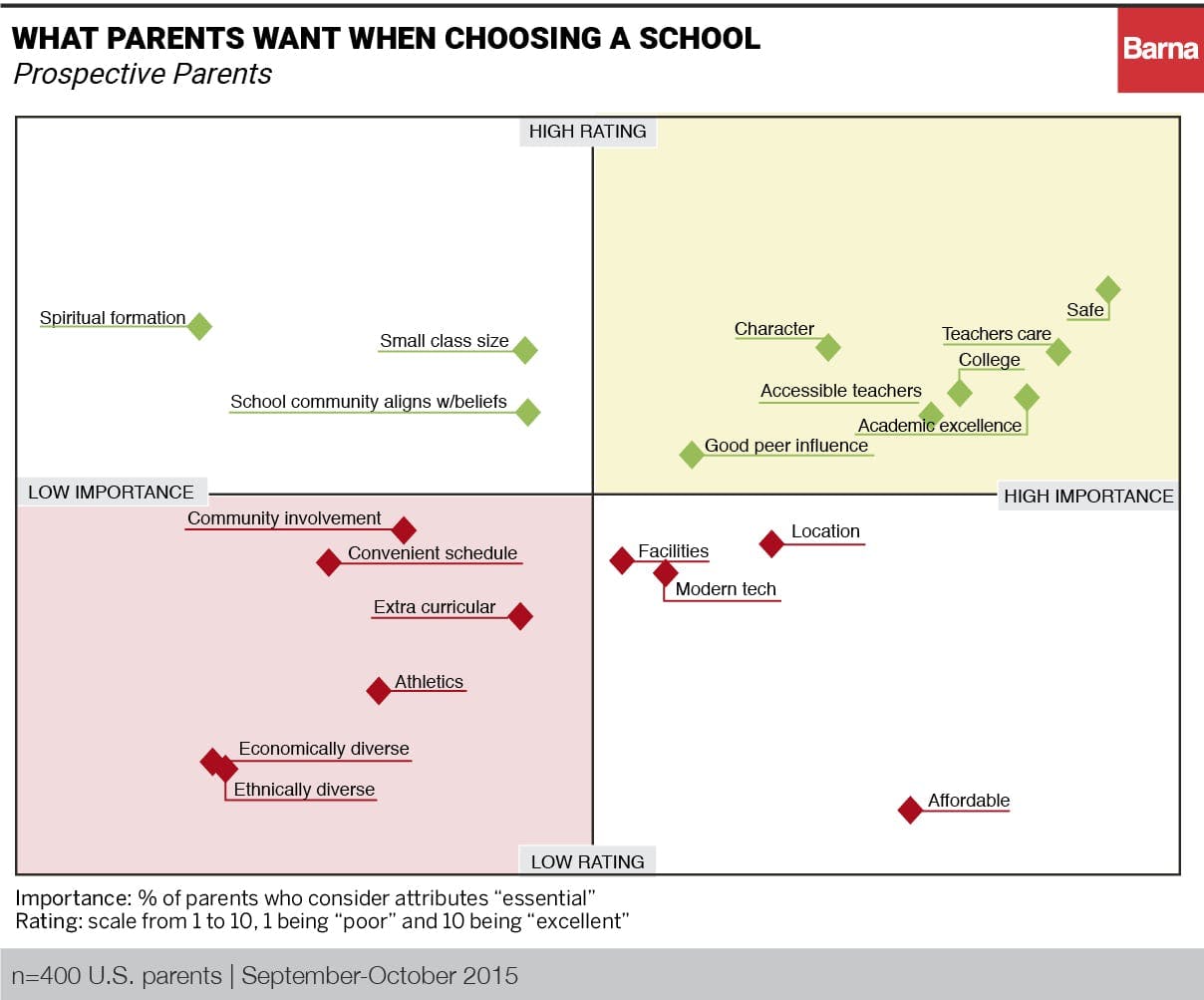 1. Safety
A safe environment is the most essential feature when choosing a school for parents of both current (98% essential) and prospective (94%) Christian school students. Safety can mean anything from a toxin-free building or a padded playground to bullying prevention. However, it can also include “cultural safety,” such as feeling safe to ask questions or express doubt, learning to work through differences or a general sense of belonging and respect.

A safe environment is essential to current and prospective parents of Christian school students. CLICK TO TWEET

Based on findings from qualitative research, parents considering sending their child to a Christian school are thinking of their children’s physical and emotional safety from other children in the school. However, parents with children currently in Christian schools are more likely to be thinking of the freedom to ask questions or raise doubts, like those related to their faith.

Among parents of current ACSI students, almost half (47%) rate their current school with a 10 of out 10 for providing a safe environment. Comparatively, only 4 percent rate charter schools and public schools in the same way. Prospective parents, though more generous toward public (21%) and charter schools (35%), also give private Christian schools (both 42%) a 10 of out 10 for their ability to provide a safe environment.

2. Quality Teachers
Children experience a wide range of relationships at school, but the core ones are with peers and teachers. Parents want warm teachers who they can reach easily. “Teachers who really care about their students” (98%) is the aspect of schools that ACSI parents are most likely to say is essential (tied with safety at 98%), followed closely by “accessible teachers,” which slightly fewer (94%) said was a necessity. Likewise, almost all prospective parents believe caring and accessible teachers (91 and 80 percent, respectively) are essential to schooling.

Parents—especially of ACSI students—generally want small class sizes for their children (current: 63%, prospective: 49%). It seems likely this aspect of a school might indicate to parents that their child will get the personal attention from teachers that nearly all deem crucial.

3. Academic Excellence
Academic excellence is a top priority for parents of both current and prospective Christian school students. Nearly all current Christian school parents(95%)say it is essential. For prospective parents, that number is slightly lower, at 88 percent. Surprisingly, parents do not consider academic excellence more important as their children grow older and closer to the window for college admissions.

Current ACSI parents rate their schools quite well for academic excellence. More than one-third (38%) give their schools a 10 out of 10. Altogether, 86 percent rate the school a seven or above, and more than two-thirds of current parents choose “fosters excellence” to describe private Christian schools—ranking them far above other types of schools.

Fewer prospective parents share that view. They give lower scores to private Christian schools, with 29 percent saying that Christian private schools have the highest academic standards. It is not clear where this difference in perceptions comes from, except that those with a personal experience of ACSI schools have a much higher view of the schools’ academics.

4. Character Development & Spirituality
Current and prospective parents both also give high priority to “intentionally developing children’s character” (current: 94%, prospective: 73%). But in addition, current parents especially desire spiritual development for their children. This reinforces the above findings showing how most current Christian school parents believe that character and spiritual development are among the ultimate purposes of education.

When it comes to spiritual formation specifically, more than eight in 10 (82%) parents of current students believe it is essential when weighing a choice between different schools, but only one-quarter of parents of prospective students(26%) feel the same.

It seems that ACSI schools (private Christian schools) fulfill these expectations, especially for current parents. More than half of parents of current students gave Christian schools the highest score (10 of 10) for being deliberate about developing children’s character (59%) and spirituality (66%). In both categories, over 97 percent of parents give the schools a score higher than six out of 10.

About the Research
A sample of ACSI schools invited parents to participate in these surveys. To qualify, parents had to have a decision-making role in their children’s education and to have at least one child enrolled in an ACSI school. The prospective parent survey went to a nationally representative group of adults who had children in grades K–11 (those with seniors in high school and no other children were not included). To be counted in the survey, they had to indicate that they would be open to sending their child to a private Christian school. There was no restriction on the religion of these parents. While this survey was offered to a nationally representative group, the group that met the qualifications was also different from an average collection of American parents. Read the full research report at ACSI.

About Barna
Barna research is a private, non-partisan, for-profit organization under the umbrella of the Issachar Companies. Located in Ventura, California, Barna Group has been conducting and analyzing primary research to understand cultural trends related to values, beliefs, attitudes and behaviors since 1984.

posted in Private, Faith Based Programs
no comments »
Share This: