Courage In A Time of Fear: A Practical Guide to Ending Bullying 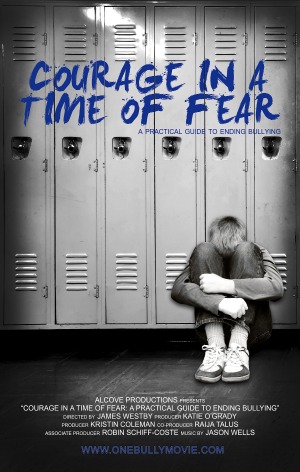 The Protectors has been busy this past year, extending our outreach and helping more children in public schools, private religious schools, and other youth-based organizations throughout the world, most recently adding film to our outreach. It was my privilege to be a consultant and even appear in the upcoming docudrama, Courage In A Time of Fear: A Practical Guide to Ending Bullying

Unlike other films about what is now the leading form of child abuse in the nation, this docudrama goes beyond explaining the problem to offering practical solutions. It premiers at the Portland Film Festival August 31st, and we hope everyone in the area gets a chance to see the film.
Because of the film’s desire to empower Bystanders to find the courage to speak up and become heroic Alongside Standers of targets–part of The Protectors core mission as well–I’m glad to announce that The Protectors will also be creating a companion study guide to accompany the film, ideal for public schools. This will be released by the end of the year and will further The Protectors outreach into lower-income schools.
For more info on the film, click here. For updates on The Protectors and all the upcoming changes, sign up for The Protectors newsletter here.
posted in Anti-bullying
no comments »
Share This: